Blog - Latest News
You are here: Home / Coffee enema: a blessing for the liver 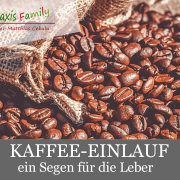 The liver is a very important organ for our body. On the one hand it is responsible for detoxification, but it is also responsible for the conversion of certain substances, for the production of certain fatty acids and amino acids and for many other processes in the body. If you burden your liver with environmental and nutritional toxins throughout your life, it is important to detoxify it from time to time. If various symptoms occur, detoxification may even become medically necessary. In this article you will learn how you can detoxify the liver naturally.

When it comes to “enema”, many people take a step back and simply do not feel like this kind of detoxification or even find it disgusting. Nevertheless, enemas have been a recognized method in naturopathy for centuries to help people in many ways. Enemas have a great effect on the intestines. The intestinal wall is gently stretched by an enema, which initiates processes in the autonomic nervous system and thus induces healing and relaxation.

Coffee contains substances that enable the liver to produce more bile acid and thus dilate the bile ducts. This creates an even flow of bile, which is extremely important for cleaning the liver. Coffee also contains anti-inflammatory substances which can heal inflammation in the margin intestinal tract or in the liver area. In addition, many substances that have an antioxidant effect in the liver as well as free radicals are rendered harmless by the coffee enema.

How does a coffee enema work?

In general, you will need the following aids for an enema:

For the liquid you can either use green coffee, which is mild and very digestible, or normal coffee. Boil half a liter and fill it up with cold water, so that you get one liter of body warm liquid. It is important that the liquid is lukewarm, as the intestine would reflexively reject a too cold liquid. Please also make sure that the liquid is not too hot, as this can cause severe burns.

Before the coffee enema, either watch your bowel movements or perform a cleansing enema (using only lukewarm water) to ensure that the bowel is emptied. Only then is a maximum cleaning effect for the liver achieved. In addition, the coffee enema purifies the blood, since the blood passes through the intestines very frequently and thus passes through the entire bloodstream about three to five times within a very short time.

When using an Irrigator cup, first fill the cup with the coffee liquid until it runs out the front of the hose. Then close the valve. This prevents air from being in the hose. Now you can do the enema by holding up the cup or preferably by hanging it up and standing on all fours. The enema usually runs through in about one to three minutes.

The klysopump works similarly, but there is a pump in the middle of the tubes with which the fluid can be manually pumped into the intestine. This variant is particularly suitable for people who are no longer so mobile, as this influence can be performed comfortably while standing.

Once the enema has been performed, you should try to maintain the fluid for 15 minutes. For beginners it is recommended to start with a smaller amount of liquid (about 300 ml) and to keep it for 5 minutes. The amount and time can then be slowly increased.

Some people are sensitive to the caffeine contained in coffee, which is usually broken down directly in the liver. In this case it is advisable to perform the running-in in the morning. If necessary, the quantity of coffee can also be diluted a little more. If the coffee enema is still not tolerated, it should not be repeated.

How often should the coffee enema be used?

A three to six-month course of treatment with daily application is recommended to achieve the best possible detoxification. In addition, a binding agent such as zeolite or chlorella should be taken during such a cure to bind released toxins in the body. Zeolite is particularly recommended for this purpose, as Chlorella cannot bind all the toxins that are released.

In South American medicine, coffee buying is even used for massive pain patients suffering from terminal colon cancer. These patients are usually not even helped by morphine, but the coffee enema can help them to be free of pain. The reasons have not yet been thoroughly researched – nevertheless: coffee can obviously work wonders.