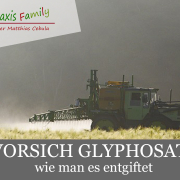 Glyphosate is a pesticide that is used for weed control in agriculture, but also for personal use. This is mainly contained in the well-known remedy “Roundup” from Monsanto. In this article you can read about the health effects of glyphosate and why it is still used.

The history of glyphosate

The main component of today’s glyphosate is the former “Agent Orange”. This was used in the Vietnam War to clear the jungle of leaves and thus get a clear view. It was sprayed over a large area of the jungle. Later, the product was used for weed killing in private use and in agriculture.

The use of glyphosate in agriculture

While the use of the poisonous agent is prohibited in organic farming, it is very often used in conventional farming. Glyphosate is used by farmers for the following reasons:

1. to clear the soil of weeds so that the seed can emerge and grow undisturbed

2. to be able to plan the harvest accurately To achieve this, the farmer sprays the entire field with glyphosate shortly before the harvest, for example when a longer dry phase occurs. The poison causes the grain (such as oats or spelt) to die. During this process, the grain once again exerts all its strength, so that the farmer can expect a 30% higher yield. On the one hand, the period of harvest can be determined relatively accurately and, on the other hand, the yield is significantly higher than it would be without the use of glyphosate. For these reasons the poison has not yet been banned on the European market. Unfortunately, a healthy alternative has not yet been found.

How dangerous is glyphosate?

In 2015, the World Health Organization (WHO) classified glyphosate in cancer category 2A, meaning that it is considered likely to cause cancer in humans. By comparison, asbestos and tobacco fall into the same category.

Now when you consider that all our food is contaminated with glyphosate, the danger becomes clear. It has been proven that the poison changes our DNA so that mutations occur. In the worst case, these can develop into cancer.

Glyphosate also binds aluminium in the body, which is then transported to the brain. Over time, the brain is increasingly poisoned with aluminium and neurological diseases such as multiple sclerosis, Parkinson’s, Alzheimer’s or dementia develop.

Glyphosate also interferes with hormone balance, which can lead to diabetes and obesity, among other things. The microbiome in the intestine also mutates so that the cells in the intestine can die from the toxins. Various bacteria that are dangerous for us grow through glyphosate, such as Borrelia bacteria.

Glyphosate binds many different substances in the body, especially minerals. In general, the supply of minerals in our fruit and vegetables is relatively low, as these are lost when the food is sprayed. In addition, the plants can hardly extract any minerals from the soil, as it is already heavily contaminated by glyphosate and phosphorus fertiliser. In the end, about five to ten percent of minerals are left over, which the plants pull out of the soil. If these are then also bound in the body by glyphosate, the body can no longer use minerals in the end.

In general you should avoid the intake of glyphosate. Only unsprayed food should be consumed. You can either grow them yourself, buy them from a local organic farmer or organic shop or order them online. You should make sure that food you eat in large quantities (for example bread) is of pesticide-free origin.

To test whether your body is heavily loaded with glyphosate, we offer you the following test options:

1. about the autonomous regulatory diagnostics in our practice
2. self-test via our Dr. Mama system
3. a urine test (approx. 35 EUR), which is sent to a laboratory and evaluated

Although there is not yet an officially established limit for humans, an evaluation can provide information about glyphosate levels in your body. The only requirement for drinking water is that it must contain less than 0.1 nanogram of glyphosate per litre. The measured values of all people, on the other hand, are much higher.

If a high value is found in you, a detox is advisable. There are several options available to you. The most important means are:

You should also work with antioxidants like vitamin C and vitamin E if possible. Selenium also reduces the dangerous effect of glyphosate.

During the detoxification phase, a suitable binder such as zeolite should also be taken to bind released glyphosate. After about a quarter of a year, the test should be repeated for review. It is clear that, in general, the supply of glyphosate in any form should be stopped.

Unfortunately, nowadays even organic food is no longer 100% free of glyphosate. The poison hangs in the air as well as in the water and thus also transfers to the biofields. In order to keep the dangerous effects and consequences as low as possible, you should make sure that you stay away from contaminated food as far as possible and use good, regional products, perhaps from the organic farmer next door.

An anthropological approach to the evaluation of preschool children exposed to pesticides in Mexico., https://www.ncbi.nlm.nih.gov/pmc/articles/PMC1533004/

Genetically engineered crops, glyphosate and the deterioration of health in the United States of America, https://www.researchgate.net/publication/283462716_Genetically_engineered_crops_glyphosate_and_the_deterioration_of_health_in_the_United_States_of_America

Effect of Humic Acid on the adsorption/desorption Behavior of Glyphosate on Goethite. Isotherms and Kinetics, https://pubmed.ncbi.nlm.nih.gov/26657085/

On the Degradation Pathway of Glyphosate and Glycine, https://pubmed.ncbi.nlm.nih.gov/29987286/