Blog - Latest News
You are here: Home / Help – I can no longer smell or taste anything! 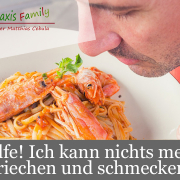 You can neither smell nor taste? In this article you will learn about the causes of the temporary or permanent loss of the sense of smell and taste and what you can do about it.

sense of smell and taste in general

The two senses are separate, which means that the restriction of the sense of smell does not necessarily affect the sense of taste and vice versa.

Causes for the loss of sense of smell and/or taste

If you suffer from a loss of the sense of smell and/or taste, the following causes can be underlying:

1. problems with the receptors that absorb the odour or taste substances If you suffer from a loss of the sense of smell and/or taste, the following causes can be underlying:

2. disruption of communication between receptors and nerves – the receptors absorb the substances, but cannot pass them on to the nerves

3. disturbance of the nerves themselves, which should transport the information to the brain.

4. the information cannot be processed in the brain

There are several reasons for this:

1. Acute or chronic infection
An infection, usually with viruses or fungi, often causes a stuffy nose. This is a purely mechanical problem – hardly any air passes through the nose, so that odours cannot be absorbed. If the throat is occupied and there is a lot of coughing, the sense of taste is also affected. Here it is important to fight the infection, then the senses should return soon.

2. injury to nerves and receptors
If the olfactory nerves or the tongue have been injured, for example by inhaling hot vapors from a house fire, the sense of smell and taste can also be lost.

4. environmental toxins
Light and heavy metals, especially cadmium, are also known to impair the sense of smell. Cadmium is mainly found in the exhaust gases of our cars. Anyone who has a lot to do with cars or is active in road construction could be affected by such poisoning. Once the receptors have been damaged, the senses are usually permanently impaired. Nevertheless, detoxification in such cases is always valuable for the body.

5. Defects
Various nutrient deficiencies in the body can also impair the transport of the absorbed information to the brain. Especially zinc plays a decisive role. In case of an existing viral infection, it is therefore advisable to take zinc as a food supplement. This can also be taken in high doses over a short application period. The recommended amount is 30 milligrams three times a day. Most suitable is zinc in the form of histidine, closely followed by zinc orotate. The best possible absorption is achieved when both forms are taken in parallel. In general, zinc can be taken once a day to support the immune system.

6. poisons and toxins from viruses and fungi
Alpha-lipoic acid, which can be taken in addition to zinc, is helpful in the case of toxins. The recommended amount here is one capsule three times a day. The acid helps to flush toxins from the body and thus detoxify it.

7. chronic diseases
For example, if you have diabetes, the nerves may no longer be supplied with sufficient blood because the blood vessels are too damaged. If there is an underlying disease, it is important to treat it early and as well as possible.

8. damage to the brain
Serious cases of loss of smell or taste may occur if the brain has been damaged. This can either be acutely caused by an accident such as a fall or a blow to the head, whereby nerve communication is most likely limited for only a short time and returns. However, it is possible that a more severe neurological disorder such as multiple sclerosis or Parkinson’s disease may lead to a permanent impairment of the senses.

If you have an increased risk of developing Alzheimer’s disease, there is a simple test: Smell peanut butter. If you do not smell anything, this is a strong indication that the frontal brain is already beginning to deteriorate. If you take direct action, you have a chance of treating the disease and significantly slowing its progression.

Six Signs That You Need Another Career
Scroll to top