In conventional medicine, the diagnosis of irritable bowel syndrome is made using the so-called exclusion procedure. First, all diseases related to the gastrointestinal tract are excluded. This is done through various means such as colonoscopy, gastroscopy, stool examination, palpation of the body, and MRI and CT. If no cause for the health problems can be found in all examinations, the condition is referred to as irritable bowel syndrome. This says nothing more than that the intestine is irritated. Many medical professionals prescribe medications to relieve symptoms, but do not research the cause further. But this way is wrong.

Irritable bowel syndrome is generally considered, both in conventional and alternative medicine, to be difficult to treat because it is very individual. Stomach and intestines function like alarm bells in our body. If anything is wrong, the stomach and intestines cause problems and bloating and constipation occur, for example. This has to do with the fact that the entire nervous system that supplies the gastrointestinal tract is highly sensitive to a wide variety of factors. If this system does not work properly, the stomach and intestines also do not work properly and the symptoms of irritable bowel syndrome occur.

1. intolerances to certain foods
Often the symptoms are triggered by gluten and dairy products. These must then be avoided completely in order to get irritable bowel syndrome under control.

2. chronic infection in the intestine
This can be caused by fungi, bacteria, parasites or sometimes viruses. The infection requires treatment (non-antibiotic).

4. Stress
During stress, the nervous system that supplies the intestines is virtually switched off.
Digests only when there is no stress. However, if the food is not digested well, undigested food components enter the intestine and can end up in places where they do not belong. There, they feed the bacteria incorrectly and irritation of the intestine can occur.

5. faulty colonization in the intestine
If too many endogenous bacteria are in the wrong place in the intestine instead of non-pathogenic germs, care must be taken to ensure that the microbiome in the intestine is better supplied in some way. The microbiome is not well under the influence of stress and electrosmog. For example, if you live near a cell phone tower, the bacteria in your intestines may go crazy. WLAN as well as the smartphone itself can also harm the intestine. Anyone suffering from the symptoms of irritable bowel syndrome should reduce electrosmog as much as possible.

6. unresolved emotional conflicts
These also cause stress to the body. Provided that the conflicts can be resolved, this usually also improves the symptoms of irritable bowel syndrome.

However, irritable bowel syndrome is not purely psychosomatic, as many general practitioners claim. Nevertheless, the clinical picture can be negatively influenced by the psyche.

7. structural problems
Too little exercise can also cause the intestines to become irritated. It may be that the lymph is not flowing enough and the fascia around the intestines are not moving properly. This makes bowel movements sluggish and can cause difficulties.

8. poisoning in the body
Certain toxins such as glyphosate, aluminum, mercury, and lead poison the entire gut microbiome, causing problems. This is where detoxification becomes inevitable. 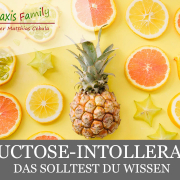 Fructose intolerance - What you should know about it
0 replies