You are here: Home / bacteria 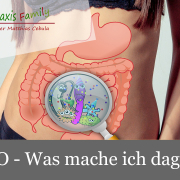 Reasons for the overgrowth of bacteria

A good way to counteract the mispopulation is to adjust the diet. For this purpose, you can easily find out with our Dr. Mama system which foods you tolerate and which you should better avoid. By changing the diet, it is possible to reduce inflammation so that the intestines can calm down and regain strength. The small intestine can restore its family of bacteria. It may be necessary to take substances that reduce fungi or parasites, or help the good bacteria displace the bad ones. A quite effective substance is inulin, which, however, must be taken with caution. This can have a very strong effect. Initially, only a small knife tip should be taken. If this is well tolerated, up to one teaspoon can be taken three times a day. Inulin is virtually the food of the small intestine bacteria.

What are the other causes?

Another cause of SIBO is poisoning in the body. If this is poisoned with pesticides, herbicides or insecticides, such as glyphosate, the bad bacteria settle in the walls of the small intestine and drive out all the good bacteria. Poisoning can further be caused by heavy metals, mercury, aluminum as a light metal, cadmium or lead, especially if they are not bound.

Electromagnetic fields, which surround us all the time, can also be a cause of SIBO. These include WLAN, cordless phones and smartphones in particular. Stress is created for the germs in the gut and it is possible that the patogenic germs outnumber the good germs.

Often the question arises for those affected whether it makes sense to take bacteria in the form of tablets or powder. Most of the time this is not the case and can be explained relatively easily: The bacterial strains in our small intestine communicate with each other and live together in a very specific way. Introducing any other bacterial strains into this construct would result in them not fitting together. It makes more sense to take a natural microbiome, in which hundreds of different bacteria have also learned to live in harmony with each other. That is, they bring a functioning team to the intestine that helps rebuild function. The best way to get live bacteria is through fermented foods such as vegetables, leaves, and fruit, if applicable. Almost every culture in the world has a fermented dish, in Germany it is sauerkraut. In principle, however, we can ferment all foods and thus make use of them.

Thus, it is possible to settle optimal bacteria in the small intestine and fight SIBO. 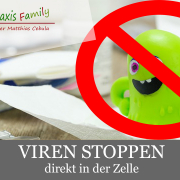 Especially in the cold season, they cause us all problems – the viruses! We know that there is often a virus behind an unpleasant cold, but what actually happens in our body during this time? In this article you will learn how a virus gets into the cells, what happens there and how the virus can be stopped in the cell before you actually get sick.

There is research that recognizes that the DNA of a newborn baby is much shorter than the DNA of an adult at an age of about eighty years. The researchers found that viruses attach themselves to DNA in the course of our lives. Once a virus enters the body, two reactions can be observed: Either the virus is directly silenced or it is read and reproduced by the cell, so to speak. In this case, the virus misuses the cell to produce novel viruses. This process continues until the immune system responds and fights the virus. The virus is either “eaten” by the immune system or the body develops corresponding antibodies. This process makes you feel ill, gives you cough, rhinitis and fever and you should sleep as much as possible during this time. Once the virus has been successfully combated, it is silenced in the cell. And there lies the crucial point! If you want to get rid of the virus, this actually means that your body silences the virus intracellularly. So you will never get rid of the virus, it will never leave your body again.

We survive the mass of viruses, about ninety percent, without getting sick. These enter the body and are immediately shut down without us feeling anything. A well-functioning immune system is of course a prerequisite for this. Those who have a poor immune system become ill more often.

Our body fights the viruses in two different ways:

This is a modification of the cell. This is caused by three different substances.
S-adenosyl-methionine (SAM) is the substance that the cell actually uses directly, but at the same time it is also the substance that hardly arrives when it is taken orally. Another substance is methylated folic acid in the form 5-MHTF. This works well, but is very expensive. To achieve an effect, a dose of one to two capsules three times a day is necessary. The third, easily accessible substance is methyl-B12 or methylcobalamin. This shows a very good effect and is relatively cheap. Recommended are the drops, which contain few additives and are of good quality, from Sunday Natural (www.sunday.de). These drops can be taken in high doses (two drops three times a day corresponds to 6000 micrograms). This dosage is suitable for a short period of time to give the body the best possible support and to fight the virus quickly.

Acetylation can also play a role in fighting viruses. The most important support you can give your body is an adequate supply of vitamin B5. This helps the cell to envelop and subsequently immobilize the virus.

If you are chronically involved in fighting viruses or if there are many people around you fighting viruses, it is worthwhile to treat yourself with the above mentioned remedies. If straight no acute virus exists, the income of Vitamin B5 or Vitamin B12 is sufficient once daily. This arms your body in the virus time.

At all times it is important to listen to your body and feel what it needs. Although various cold remedies help to alleviate the symptoms of an existing cold, they cannot work deep inside the cells. The faster you react to the signals of your body, the faster you will get healthy again.