You are here: Home / Intestinal obstruction 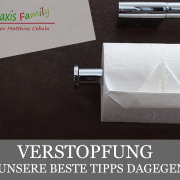 The bowel movement does not come regularly, you feel uncomfortable, you are bloated and the bowel obviously does not work as it should. The cause? Constipation. In this article you will learn what it means to suffer from constipation, where this problem comes from and what you can do about it.

What happens in the body?

In general, daily bowel movements are normal and above all healthy. If the stool and thus the digestive remains remain in the body for more than a day, the remains may rot or ferment, depending on how the diet is organised. This process produces toxic substances and gases, which are then absorbed by the intestine and distributed throughout the entire biosystem. This leads to many health problems. In addition, the regulatory capacity of the body is disturbed. According to environmental medicine, bowel movements should therefore take place at least once a day.

Causes and types of constipation

There are many causes that can delay bowel movement. There are three different types of constipation:

1. the chair is too firm

If the stool in the body becomes too solid, this is usually due to a lack of fluid in the body. Our intestine consists of two large parts, the small and large intestine. The actual digestion takes place in the small intestine. The food is decomposed, processed with enzymes and absorbed. The intestinal villi absorb nutrients, as do the bacteria in the microbiome. This area, where everything is processed, is relatively fluid. Following this process, the liquid slurry enters the large intestine, which ensures that the stool ultimately becomes firmer by absorbing liquid. As a result, the body does not lose too much fluid and can therefore maintain a better balance.

However, if there is a general lack of fluid in the body due to too little fluid intake or too much fluid loss, for example through heavy sweating, it is possible that the colon recovers this fluid during digestion. As a result, the stool may become much too solid, can no longer move in the intestine and consequently lead to constipation.

It is therefore particularly important to drink enough! If you are not thirsty enough, it can help to salt your food a little more (for example with good sea salt). Thus the thirst comes by itself.

In addition, a derailment in the mineral sector may be a possible cause. A lack of potassium or magnesium can throw the body out of balance. Magnesium can easily be added on its own. However, caution is required with potassium, which should only be added as part of a therapeutic treatment, as an overdose can lead to a high dose in the blood and thus, in the worst case, to heart flutter and even cardiac arrest. In general, however, you can take potassium-containing foods, which are always preferable to tablets.

Stress and toxins can also cause problems for the intestines, so regular detoxification is recommended.

3. the sphincter does not open

The third main cause of constipation is problems with the sphincter muscle. We have a sphincter muscle that we can consciously control, namely when we go to the toilet. But we have another one that we cannot consciously control. This usually shuts down under stress, for example when starting a journey. The body is in a new environment and this often leads to not being able to go to the toilet in the first few days of the holiday. However, stress in everyday life or at work as well as unresolved psychological issues such as traumatisation can also lead to a chronic negative influence on the sphincter muscle. In such cases, it is important to reduce stress and resolve conflicts with therapeutic treatment.

If, in addition to constipation, hair loss, fatigue and weight gain occur, a lack of thyroid hormones could be the cause. If there is any suspicion, the hormone level should be checked by a doctor.

In case of constipation, no matter what kind or cause, it is important to drink a lot. In addition, magnesium and a good diet rich in fibre can usually help.

If you are already suffering from long-term constipation, you can change your diet completely to vegetable-based foods and, if possible, avoid gluten for a while, as this often leads to latent intestinal inflammation. After about six to eight weeks there should be an improvement.

In addition, taking psyllium husks (about 1-2 times a day, dissolve a tablespoon in 300 ml of water and drink immediately) can greatly improve digestion.

You suffer from indigestion? Dare to do a water enema with the help of an irrigator to be relieved for the day or night, when the daily bowel movement is once again delayed.

Find the cause – treat it – and finally feel carefree again!