Blog - Latest News
You are here: Home / The dangers of a waterbed 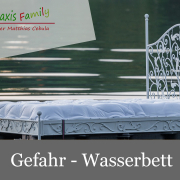 The question of whether waterbeds are healthy is answered differently depending on one’s perspective. From an orthopedist’s point of view, waterbeds are very suitable for combating or even preventing musculoskeletal pain, such as back pain. A waterbed optimally molds to the user’s body, and also many users confirm that due to a waterbed they suffer less from back pain or other symptoms related to the skeleton. But basically, considering the disadvantages and problems that a waterbed brings, this is a high price. What disadvantages arise from sleeping in a waterbed, you will learn in this article.

Basically, there are two major problems, which we would now like to discuss in more detail. Many users are not even aware of them, because when buying a waterbed, first of all the advantages are described, and among possible disadvantages are usually considered only aspects such as cost and effort, but not the health of the user.

1. heating in the waterbed

The heater brings the cozy warmth to the waterbed, which sounds tempting at first. At times when the heating remains off, as is usually the case during high temperatures in the summer, the heating does not pose a problem. However, if it is switched on, it represents an electromagnetic field. It thus ensures that a low-frequency electromagnetic current is permanently present. This fact is classified as a hazard potential by both the BGA and the WHO. When our body is exposed to such a low-frequency, electromagnetic field for many hours, it affects our body cells. Especially at night our body is very sensitive. Cells complete their cell divisions during this time, so using a waterbed makes cell division a compromised process. As the cells divide, they can easily degenerate, which can then lead to cancer.

Regeneration of the body and cells also takes place at night. If these processes are permanently affected by an electromagnetic field, this is very harmful. This electromagnetic field is, of course, not comparable with those that are specifically used in magnetic field therapy. The heating in the waterbed scatters frequencies wildly, increasing the risk of cancer over the years. Cancer develops whenever cells malfunction in some way or divide in a degenerate manner. If a defect occurs during cell division and this defective cell continues to divide, cancer develops.

2. water as a resonant element

Water can go into resonance with every vibration of our earth. It is therefore the only element that is resonant to all frequencies. Resonant means that water can react to all environmental influences. On the one hand, this knowledge is very valuable and well usable, but in the case of a waterbed, this very property poses a great danger to our health. In addition, if the water is formed into a cuboid, it develops a reinforcing effect. The rays, which arrive through the heating as well as through other environmental factors such as WLAN, mobile phone masts, 5G, etc., are thus again significantly amplified. The rays, which already make us sick, have an even more negative effect on us through the supposedly healthy waterbed.
We always test waterbeds on patients and find that chronic diseases are caused by them, or at least the use of the waterbed does not cure them.

If you want to be and stay healthy, we strongly advise against using a waterbed.

Water against cancer
Scroll to top